The history of the lift truck extends back to the 19th century, but the first commercially made precursor to the modern forklift was the Clark Truclift. It is often cited as the first true forklift because it had a hydraulic lifting mechanism and forks.

The Truclift was a revolutionary development, but forklifts have continued to evolve steadily. Further refinements were made over the course of the 20th century and history will probably show that the first half of the 21st century will mark another revolution in lift truck design. 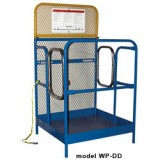 Big changes in forklift technology have already occurred. Newer models of forklifts feature better ergonomic features than older forklifts and some forklift manufacturers are beginning to install “smart” devices on forklifts that allow them to be tracked and even diagnosed for faults. A blog on our sister site, forkliftaccessories.com, The Internet and the New World of Forklift Accessories, goes into detail about current and future trends in the use of WiFi in conjunction with forklifts, forklift parts, and forklift accessories.

That’s only the beginning, though. Manufacturers are introducing automatic guiding and remote control systems into their forklifts. It is conceivable that in the future, forklift operators will no longer be needed and the forklifts we use today will become redundant, but that time has not yet come.

Only the largest operations are looking seriously at fully automatic or remote-controlled forklifts today. Other innovations in forklift technology can either be retrofitted to existing lift trucks or do not provide enough value to the average owner or operator to be worth installing. It is interesting, though, to note some of the technology that is with us today or will be in the near future:

• Improved ergonomics help operators work more productively without working harder.
• Hybrid lift trucks are being developed that can switch from electric power to diesel for heavier applications.
• Lithium-ion batteries are small and lightweight. Currently, they are prohibitively expensive, but may not be in the future.
• Integrated scales that allow a load to be accurately weighed and logged are already on the market.
• Very narrow aisle forklifts are now able to work in even narrower aisles and with more maneuverability. Cameras installed on some models increase visibility.

Is Your Used Forklift Redundant?

We would all like to have the latest and greatest in technology, but we don’t always need it. In the average industrial setting, your used forklift probably wouldn’t benefit from much of the new technology that has been introduced in recent years. Unless you have a very high turnover, your bottom line wouldn’t benefit, either, since replacing used forklifts with new ones is very expensive.

For the present and foreseeable future, used forklifts still have a vital place in the workplace. Your best investment is in maintenance and when the time comes to replace your lift truck, a used or reconditioned forklift will serve you well. And don’t forget. Those new forklifts that are coming on to the market today will be used for forklifts by the time you need to upgrade.