Can you think of an industry that doesn’t need forklifts at some point in the supply chain? Whether it’s in warehousing, manufacturing or in the distribution system, there’s at least one forklift involved. That’s why economists take an interest in forklift sales: these reports are remarkably good reflections of the state of the economy as a whole. 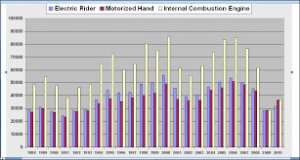 The graph above, from the Industrial Truck Association, shows forklift sales statistics in the United States between 1988 and 2010. For most of those years, sales were reasonably buoyant, with troughs being followed by even higher peaks. In 2009, though, sales of internal combustion forklifts plunged to their lowest level. We all know what happened to precipitate that fall.

In 2010, there was a modest recovery in industrial truck sales, but IC lift trucks remained low. What happened in 2011 and 2012? According to Modern Materials Handling, forklift sales jumped over 36% in 2011 and a further 20% in the first 5 months of 2012. Worldwide, the increases weren’t as dramatic, but the trend was definitely forward.

Unfortunately, no similar statistics are available for used forklifts because they are sold by a variety of private parties and small businesses, so sales data is difficult to gather. However, if used forklift sales statistics were available, they would tell another interesting side of the economic equation.

While accurate data is not available, it’s safe to assume that when new forklift sales are down, as they were in 2009 and 2010, used forklifts would be in high demand, just as used cars were in those years. Then, when the economy began to recover, so did new car sales. When new car sales slumped at the height of the recession, used cars were in high demand and their prices soared. This remained a trend until 2012, when the market regained confidence and people began trading in their used cars for new.

The same thing is happening today in the used forklift market. New forklift sales are skyrocketing and more used forklifts are coming on to the market. This is good news if you’re in the market for a used or reconditioned forklift, because you have more to choose from at lower prices.

The fact that new lift truck sales are buoyant is good news for used forklift buyers for another reason. Since forklift sales historically reflect the state of the economy, it’s safe to assume that the economy is on the upswing and a modest investment in necessary equipment is warranted.

The bottom line is this: if you’ve been thinking about buying a used forklift, now is a good time to start looking. Check out the selection at reconditionedforklifts.com and find a budget-priced used or reconditioned forklift. There’s no better investment you can make than in the “engine of the economy” – the industrial truck.