In Load Handling And Composition On A Forklift – Part II: Safe Load Capacity we discussed factors that are essential in creating a safe load capacity when loading a forklift.

In this article, we will discuss Maximum Load Moment.

Experienced forklift operators should know that the way in which weight is distributed changes the amount of weight the lift truck will safely carry.

You can experience this yourself by simply lifting a 5-pound box. As you extend your arms, the center of the box’s weight moves a greater distance from your body. So the box feels heavier and you 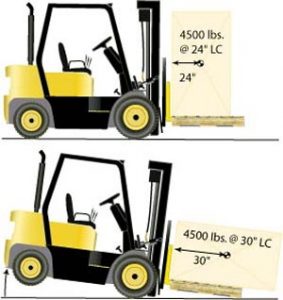 If the maximum load moment is exceeded, an improperly distributed load may tip the forklift. (Graphic courtesy of OSHA)

will tend to fall forward.

The principle is known as “increasing the load center distance and it can cause a forklift to tip over.

Whenever the load center distance is increased, it is actually increasing what is called “Load Moment.”

The object’s weight multiplied by the object’s distance from the pivot point equals load moment.

The pivot point on a sit-down counterbalanced forklift is the axle of the front wheels. It is this Load Moment that determines how much overturning force is being applied to the forklift (Load moment = Weight X Distance).

Since the overturning force depends on both the weight of the load and the load’s distance from the pivot point, a forklift’s capacity is always state in terms of both –the load’s weight and its load center distance.

So if the load center distance for the actual load is greater than the standard 24-inches, the only way to assure that the load moments doesn’t exceed 72,000-inch/pounds is to reduce the load.

If you carry a load on your forklift that is near the maximum allowable capacity of that lift, then the lift could tip over, lose the load, or cause the load to fall, which can cause injury to another person or damage to the forklift.

Therefore, it is recommended that a forklift operator:

• Calculate the maximum allowable load moment to assure that an unusual load can be handled safely.
• Minimize the load center distance measured from the back of the forks to the center of the load to allow the forklift to carry more weight.
• Use extra caution when handling extra heavy loads that may approach the truck’s maximum capacity. For example, when handling a maximum load, the load should be carried at the lowest position possible, the lift should be accelerated slowly and evenly, and the forks should be cautiously tilted forward.
• Maintain control of the vehicle at all times.
• Do not exceed the stated capacity of your lift. Know its mechanical limits.