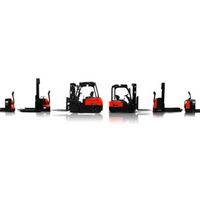 According to New Zealand’s stuff.com.nz, the “saucy” ad was deemed too offensive for viewers and was banned by New Zealand’s advertising watchdog. What was so offensive about it? According to New Zealand’s Advertising Code,”products cannot be promoted through the use of exploitative or degrading sexual images, especially if the product is completely unrelated to such images.” Since used forklifts are completely unrelated to any type of sexual imagery, degrading or not, it seems like it was a fair call on the Advertising Standards Authority’s part. To be fair to the used forklift dealer, though, there was a message in the ad.

In the foreground of the picture that accompanied the ad, a young woman in revealing clothes was holding a heavy chain. In the background was a used forklift. The ad read, “You know you’re not the first, but does that really matter?” The message, of course, was that a used forklift was just as good as a new one, but the fact that it appealed to men on another level made it offensive.

In their defense, the used forklift dealer argued that another popular ad for men’s underwear had a similarly suggestive photo and slogan. The Complaints Board that heard the case rejected the argument, stating that the difference between the 2 ads was that the other one actually intended to sell the underwear that appeared in the ad.

How to Advertise Forklifts

We may not be as foolhardy as the used forklift dealer in New Zealand was, but we have to admit, they got their point across in just a few words. If a good quality used or reconditioned forklift can offer you years of service at a fraction of the cost of a new lift truck, does it matter that it is a pre-owned forklift? When buying any piece of equipment, the important thing to consider is value for money. How do you determine the value for money of a forklift?

• Does it make sense to buy a new forklift if it is not going to be running full time and increasing your profits?
• Can a reconditioned forklift do the jobs that need to be done as cost-effectively as a new forklift could?
• If you need a forklift for occasional use only, what is the value of having a shiny new forklift sitting in a corner of your warehouse?

Now that the New Zealand Company has to scrap their controversial photograph, they’ll have to come up with something new. It may not be as eye-catching, but how about showing a new forklift and a used forklift side-by-side performing the same task? Throw in 2 price tags, one emblazoned across the front of the new forklift and one across the used forklift, and add the slogan, “You know you’re not the first, but does that really matter when you’re saving this much money?” and the readers will get the point. A word of advice, though — please use fully dressed forklift drivers in your next ad campaign.