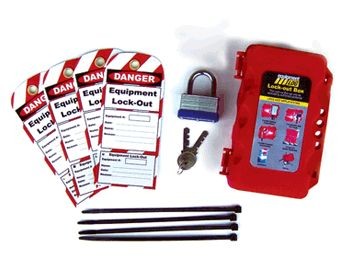 Lockout tags are used to take vehicles, equipment, and other materials out of service because of damage, failure, or another legitimate reason such as a scheduled audit or inspection.

When you see a lockout tag, it needs to be taken seriously. Don’t ignore or disregard them even if you desperately need to use the locked out equipment. It’s not worth the risk.

Here’s why lockout tags are important along with some real-world examples of how they have been misused.

Don’t Mess Around with Lockout Tags

All employees need to take lockout tags seriously. At the same time, they shouldn’t be placed on equipment lightly. Lockout tags should only be used if there is a serious reason why that particular piece of equipment should not be used.

There have been real-world instances where workers have placed lockout tags on a specific forklift, for example, because didn’t want anybody else to use it and instead sought to “reserve” it for themselves. This is a bad idea because it undermines the seriousness of the lockout tag.

In this scenario, another driver might disregard a lockout tag in the future because they thought a co-worker was simply being selfish, and it could lead to disaster if the vehicle is actually in disrepair.

Educate Everybody on Lockout Tags

Similarly, every employee needs to understand how lockout tags work, why they should be taken seriously, and how to use them effectively. This includes full-time workers, part-timers, and seasonal workers.

If a particular vehicle or piece of equipment is locked out, nobody should use it until it has been approved by qualified personnel to be returned to service. There have been real-world cases where people have ignored, disregarded, or not seen lockout tags and used the locked out equipment anyway to their own regret.

Educating everybody within the organization about how they work and why they are important is critical to workplace safety.